Some B2B marketing efforts are highly inventive, such as the Superhero campaign executed for outsourced supply chain services vendor Zomax by KC Associates. But B2B IT marketing is generally a very practical and highly budget-conscious business. B2C marketing is simply a different world. Here are two examples of the kind of "wow" campaigns that can be produced when money is apparently no object.

First, Mercedes has produced one of the most incredibly creative websites ever (this can be a tad slow loading but it's worth it). The site was produced by Agency Republic in London, recently named Marketing's Digital Agency of the Year. Their own site is surprisingly bland (a "shoemaker's children" kind of thing perhaps?); a bit of geek insight as to how they produced the Mercedes site would have been fascinating. You can view other samples of their online marketing work here. 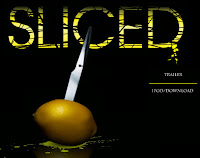 Second, VEX, a Canadian maker of hard lemonade and similar adult beverages, has produced an online campaign for its new strawberry-orange-banana flavor which spoofs schlocky horror films at Sliced, the Movie (note: use IE as the site doesn't load properly in Firefox). In this mock movie trailer, a group of fruits—strawberries, bananas, lemons, kiwis—head off to remote country house for a farewell to summer get-together. But as night falls and the power mysteriously fails, they head to the basement to look for a breaker, and...some gruesome slicing, dicing, blending and other horrible fates ensue. The campaign, produced by GJP Advertising in Toronto, also features banner ads running on several highly-trafficked Canadian sites, with lines such as "When a killer comes knocking...how will you run...when you don't have legs?" and "More horrifying than Hostel. More chilling than Saw. More disturbing than Britney."

The VEX campaign may have been inspired by Scary Mary, which has be among the most clever recut movie trailers ever. You'll never look at Mary Poppins the same way again.

syferium said…
I saw your website and all the blgs are very good, so you have the opportunity to sell space ads on you blogs...


i receive 72$ every month doing nothing, there is just 4 links at my website)))And you're website is much more better then mine.
Payments via PAYPAL and CHECK!!

No matter what language your website or blog has. No matter how many visitors a day visit your website, it's only depends on the PR!
PR MUST BE AT LEAST 2!!!!

By Tom Pick November 05, 2008
Most Web 2.0 sites fall into one of a few increasingly well-defined categories, such as social bookmarking (Digg, del.icio.us, Searchles), social networking (LinkedIn, Facebook) or file sharing (YouTube, Flickr, podOmatic ). Twitter, however, stands alone. (Okay, there's also Pownce, but Twitter is better.) Self-described as simply a real-time short messaging service and often referred to a microblogging platform , to those new to it, Twitter resembles nothing so much as a giant cocktail party where everyone talks at once and hopes others listen. You can tell who's important by how many "followers" that person has, though that's no guarantee anyone is really paying attention. People (or rather, Tweeple in the Twitter lexicon ) can come and go without really being noticed, just like at a real (very, very large) gathering. Twitter can be difficult to explain to those unfamiliar with it. Jennifer Laycock writes that Twitter is like Post-It notes ; lots of them a
3 comments
Read more

SEO Link Spam - What Is It and Who's to Blame?

By Tom Pick August 19, 2009
Over the years, unscrupulous black hat SEO scammers have used a variety of tricks—keyword stuffing, link farms, white text and others—to try to manipulate search results, and the algorithms used by Google, Yahoo and the other search engines have evolved to identify and squelch the effectiveness of such nefarious tactics. A more vexing issue for the search engines is dealing with link spam, not only because it is difficult to detect and address algorithmically, but because there isn't even a clear definition. As a website owner, the term represents emails like this: Dear webmaster, As a part of ongoing campaign to increase the Link Popularity of My website I am looking for some good potential sites like yours. I review your site and find that, in SEO perspective your site is Perfect. Also, this would be a great resource for my visitors too. I would request you to consider listing my site. Title:- My Spammy Website URL:- http://www.indiaspamforyou.com Description:- mi
8 comments
Read more

By Anonymous July 09, 2018
How SEO Tools Can Help Make Your Mobile Website Appealing: The world is rapidly going mobile, and if you haven't already built a mobile version of your site yet, then your competition will happily take care of this part for you, by snatching your mobile visitors away from you. Learning how social media marketing can help gain awareness for your business or site is a great positive.  Here we provide a great example of how a cell phone makeover can radically change the experience for your mobile visitors.  We begin with some simple guidelines to ensure your website's mobile experience is designed to please the user in the hopes of gaining more clients. Through the use of seo tools , the benefits derived from the gained knowledge in marketing could create improvements to any aspects of the works. This is beneficial for search engine optimization purposes.  Importantly, keep your mobile site to have minimized any challenges that could occur for viewers. One of the m
Post a Comment
Read more