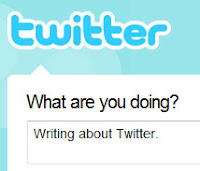 Self-described as simply a real-time short messaging service and often referred to a microblogging platform, to those new to it, Twitter resembles nothing so much as a giant cocktail party where everyone talks at once and hopes others listen. You can tell who's important by how many "followers" that person has, though that's no guarantee anyone is really paying attention. People (or rather, Tweeple in the Twitter lexicon) can come and go without really being noticed, just like at a real (very, very large) gathering.

Twitter can be difficult to explain to those unfamiliar with it. Jennifer Laycock writes that Twitter is like Post-It notes; lots of them and in multiple colors. Johnny Makkar provides some helpful guidance on how to get your co-workers to start Twittering, in which he links to this long but informative video from HubSpot on how to use Twitter for marketing and PR.

I'm sure there's a better list somewhere, but from my observation thus far there are five primary types of messages posted to Twitter:

Evangelizing: One of the most common and valuable uses of Twitter—linking to and promoting great stuff, like articles, blog posts, videos, etc. Example from Bill Hartzer: "Ask.com Adds One-Click Election Poll Information to Search http://ff.im/5x8." It's okay to evangelize your own stuff occasionally, as long as 1) it's great stuff, and 2) you don't evangelize only your own content. That would be...Twitterbation?

Social: Arranging live meetings is another practical, common and perfectly acceptable use of Twitter. Got a long layover at the Detroit airport? Use Twitter to see who among your "followers" might also happen to be there and grab a cup of coffee together. Example from Chris Brogan: "Chicago area meetup 11/10: http://tinyurl.com/54rs7m Pass it on!"

Thoughtful: Inspiration, observation and philosophy in 140 characters or less. For example, from Jeremiah Owyang: "Be inspired this week my friends: Try something new, learn something you always wanted to --be uncomfortable."

Conversational: Using the @ symbol before someone's Twitter name lets you target a public message to them. A fine practice, though it should be used in moderation. If you never use the @ symbol, you may be perceived as anti-social, arrogant or purely self-promotional. If you use it too much, you should probably take some of these conversations offline.

Annoying: Tweets which add absolutely no value to anyone, but are written just for the sake of writing something. Among the worst are the "Off to the gym," "Going for a run," "Just got back from a workout and gosh I'm stiff!" variety. Argh. The rest of the world would care about this...why?

Fans of Twitter believe it is a key social media tool for business. According to the MindValley Labs blog, Twitter is an incredibly powerful marketing tool, and they offer up three forbidden Twitter mind control tricks for marketing, stating "Twitter is currently the closest app on Earth that replicates the actual thought patterns of the human mind. You see, the human mind does not really think in blog and article form. Instead, it thinks in a stream of consciousness way, random disjointed thought layered upon random disjointed thought...After all, what’s more intimate than the whispering voices in your head?"

Ellie Mirman of HubSpot contends that tapping into the conversations happening on Twitter related to your brand, product or industry is crucial even for niche businesses. And Miguel Cancino explains why Twitter is a key tool for reputation management.

This was the first post in a two-part series. Part 2 will cover best practices for using Twitter, Twitter tools, and the future outlook for this platform.

Hema said…
Nice Post.
Thank you for sharing.
https://www.justbake.in/
6:50 AM

Marie Christine said…
The credit for my successful Twitter account goes to https://wizugo.com/. I used to spend a lot of time on Twitter and still, I was not able to get a decent amount of followers. For the first time, I used Wizugo for my Twitter account automation, and it became the savior of my sinking account. Within a few weeks, I got a lot of active followers that like and comment on my pictures and videos that I tweet.
5:36 AM

By Tom Pick April 21, 2008
Hosted marketing email services are almost a commodity. Much like web hosting, email outsourcing is pretty much a no-brainer for all but the highest volume mail senders; email providers have already made the investments in deliverability, CAN-SPAM compliance, HTML tools and reporting, so there's no reason to build your own. And also similar to web hosting providers, there are few significant functional differences to separate one from another, so the choice largely comes down to personal preference, and—as with all commodities—price. Email hosting services aren't quite a commodity, as there are still differences in functionality and service offerings. Virtually all of them, however, offer at least the same basic set of capabilities, including list management, tools for creating HTML and plain text emails, scheduling and reporting. This chart compares current pricing levels for eight popular hosted marketing email platforms (click to enlarge): So, which platform offers the best
2 comments
Read more

By Kelli Frederick March 26, 2018
How to Come Up With a Rock-Solid Brand Strategy for Your Business Modern businesses have to battle for audiences’ attention. A strong brand will make your business stand out from the competition and help create a long-lasting, positive association with target audiences. Without a solid branding strategy , your business is in danger of being lost in the crowd and failing to impress worthwhile audiences. Although investing in building and growing your brand may not seem to give immediate returns, the exercise has long-term benefits that impact visibility and conversion positively. A solid branding strategy is a result of conscientious effort and thorough research and we have distilled the complex mechanism into comprehensible steps below: Outline your brand’s objectives Your brand’s objectives need to align with your business goals. If you are starting a new venture, your vision needs to be clear and realistic. Your brand message, proposition, and tone will resonat
Post a Comment
Read more

The 11th P of Blogging: Perspective

By Tom Pick April 11, 2008
The 10Ps of blogging may seem to be quite enough, but a recent article by Matt Richtel of the New Yorks Times entitled Work fast, die young: The blogger lifestyle? pointed out the need for an 11th "P" word—perspective. Why do you blog? Probably for many reasons, but most of the bloggers I most frequently interact with—people like Brian Carroll of the B2B Lead Generation Blog , Elge Premeau at My Travels on the Net , Albert Maruggi at the Marketing Edge , and Skip Lineberg of Marketing Genius —blog primarily as a PR activity to support a separate consulting business or marketing agency. There are also corporate bloggers, analysts, journalists, and people who just enjoy writing as a creative outlet. The vast majority of bloggers do so on a part-time basis, but a few people—a tiny fraction of a fraction of the 100 million-plus bloggers—do it for a living. Which brings us back to Richtel's article. He focused on two technology bloggers, Russell Shaw and Marc Orchant , who
Post a Comment
Read more