By Tom Pick November 13, 2007
Back in May of this year, I reported the results of a test of the impact on B2B website traffic growth using Web 2.0 social tagging. That experiment showed that tagging B2B thought-leadership content on social media sites increased traffic growth for B2B websites by 50%, and on a B2B marketing blog by more than 100%, over 60 days.


So—how do the numbers look six months later? Can these traffic growth gains be sustained?


As shown here, on the B2B website, WebMarketCentral, traffic growth slowed considerably over the summer before posting a fall rebound, ending with a 12.7% monthly growth rate for the year—still a respectable monthly traffic growth rate, but well below the trend line following the social tagging activity. 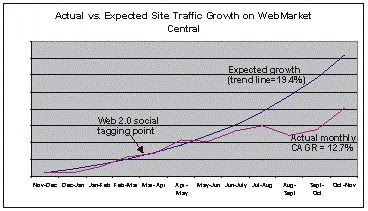 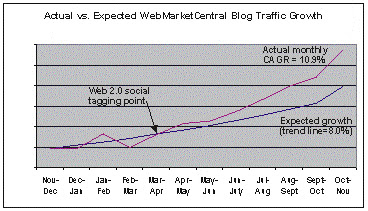 Three conclusions from this:


1) The effect of social tagging on B2B website traffic, even for thought-leadership content, is primarily a short-term bump in the traffic growth rate (though there are some positive long-term SEO effects as well). This pattern was similar over several B2B websites tested.


2) Most B2B websites show a flattening of traffic growth over the summer months, with perhaps even a traffic dip in August, followed by an autumn rebound. This pattern held for every B2B website I tracked (except one—a software application targeted at government buyers, which may have a different pattern from the private sector market).


3) Social media tagging appears to have a significant, sustained effect on traffic growth for blogs.


The lesson for B2B companies: blogging may be hard work requiring consistent effort, but it is worthwhile for establishing a thought leadership position in your industry. While developing relevant content for your corporate website is still important for PR and SEO purposes, writing and promoting a blog establishes credibility in a way that articles viewed as "vendor content" can't. Social media tagging on sites such as ClipMarks, Searchles, Digg and Zimbio can have positive effects on your website traffic, but has a much larger effect on driving increased traffic to a thoughtful and relevant industry blog.

By Tom Pick March 19, 2008
After being part of a team launching a company this week and four new website design projects, plus my "regular" work of helping clients achieve superior online and offline marketing results, I need a short vacation getaway for some family time. So, the blog will take a brief time out. I'll be back to writing about social networking, interactive PR, SEO and SEM, and the usual stuff as soon as I make sure my clients are well taken care of for the moment. Speaking of that company launch , however—if your role has anything to do with business intelligence, data mining, analytics or database marketing—you're going to be hearing a lot about this company in the coming weeks and months: Back soon. ***** technorati tags: website design projects, social networking, interactive PR, business intelligence, data mining, data analytics, database marketing del.icio.us tags: website design projects, social networking, interactive PR, business intellige
1 comment
Read more

SEO Link Spam - What Is It and Who's to Blame?

By Tom Pick August 19, 2009
Over the years, unscrupulous black hat SEO scammers have used a variety of tricks—keyword stuffing, link farms, white text and others—to try to manipulate search results, and the algorithms used by Google, Yahoo and the other search engines have evolved to identify and squelch the effectiveness of such nefarious tactics. A more vexing issue for the search engines is dealing with link spam, not only because it is difficult to detect and address algorithmically, but because there isn't even a clear definition. As a website owner, the term represents emails like this: Dear webmaster, As a part of ongoing campaign to increase the Link Popularity of My website I am looking for some good potential sites like yours. I review your site and find that, in SEO perspective your site is Perfect. Also, this would be a great resource for my visitors too. I would request you to consider listing my site. Title:- My Spammy Website URL:- http://www.indiaspamforyou.com Description:- mi
8 comments
Read more

The Wrong Way to Build External Links for SEO

By Tom Pick October 05, 2007
Anyone who's worked on search engine optimization (SEO) for any length of time understands the importance of building relevant external links to a website. But whether you do choose to SEO internally, outsource it domestically, or offshore the effort, it's important to get this process right. If you're doing it internally, follow established best practices for this effort (including the information below). If you outsource your SEO, ask your vendor exactly how they perform their SEO work. I frequently receive reciprocal link requests for WebMarketCentral.com . Some of the requests are well-written, some inelegant, some spammy. But I recently received the following message, which was among the worst I had ever seen: Subject: Link exchange Dear Webmaster, My name is (name), and I run the web sites.: http://www.clickatest.co.uk/(PR>2) http://www.clickajob.co.uk/(PR>3) http://www.freshpromotion.com/ I recently found your site and am very interested in exchanging links. Y
2 comments
Read more