How to Successfully Launch B2B Products and Services 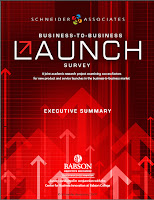 A new survey produced by Schneider Associates and the Center for Business Innovation at Babson College details some very interesting findings on what makes for a successful B2B product or service launch. The free report, entitled Business-to-Business Launch Survey, profiles the ten key lessons B2B companies can use to improve their odds for launch success. The study investigated effective product and service launches to help B2B product and service managers improve their launch practices and success rate.

Among the most interesting findings in the study (and keep in mind, these are the successful launches):


There's lots more. To improve the success of your next B2B service or product launch, check out this study. Finally (being an agency type) my favorite quote from the report:

"Having the right marketing professionals participate in designing your launch from the start is critical. It's worth noting that nearly all the factors B2B launchers in our survey chose as being most important to their success are best handled by a marketing communications firm."

By Tom Pick November 05, 2008
Most Web 2.0 sites fall into one of a few increasingly well-defined categories, such as social bookmarking (Digg, del.icio.us, Searchles), social networking (LinkedIn, Facebook) or file sharing (YouTube, Flickr, podOmatic ). Twitter, however, stands alone. (Okay, there's also Pownce, but Twitter is better.) Self-described as simply a real-time short messaging service and often referred to a microblogging platform , to those new to it, Twitter resembles nothing so much as a giant cocktail party where everyone talks at once and hopes others listen. You can tell who's important by how many "followers" that person has, though that's no guarantee anyone is really paying attention. People (or rather, Tweeple in the Twitter lexicon ) can come and go without really being noticed, just like at a real (very, very large) gathering. Twitter can be difficult to explain to those unfamiliar with it. Jennifer Laycock writes that Twitter is like Post-It notes ; lots of them a
3 comments
Read more

Social Networking may not be All That

By Tom Pick October 23, 2006
The theory behind social networking, often positioned as a key element of Web 2.0 , seems simple and powerful: instead of buying into "marketing hype" about a product or service, or the canned references of an individual, one can get honest opinions from independent, unbiased sources about the quality and reliability of a company, product, service, or person. Put another way, you might not select a plumbing contractor because he has a big ad in the yellow pages, but if Aunt Mabel recommends him, then he must be okay. Social networking is a way to get the opinions of a lot of Aunt Mabels at once. But what if it doesn't turn out that way? What if the most -recommended contractors on Angie's List turn out to be the ones that already have the biggest Yellow Pages ads? What if the most highly-rated products on epinions are the ones already backed by huge national advertising budgets? What if the most commonly tagged blogs on del.icio.us are the ones written by "ho
1 comment
Read more