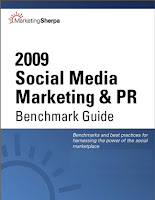 In It Came from Facebook! The Social Media Marketing Challenge that Can't be Ignored, I quoted a few interesting statistics—such as that Facebook is now used by one out of every three people who have Internet access, globally, and that 69% of B2B decision makers use social media for business purposes—to get across the point that companies of all sizes need to figure out how to incorporate social media in their marketing and PR plans. Here's some research on how to do that.

MarketingSherpa's 2009 Social Media & PR Benchmark Guide (PDF) provides a wealth of useful statistics and guidance. The publisher defines social media marketing and PR as "the practice of facilitating a dialogue and sharing content between companies, influencers, prospects and customers, using various online platforms including blogs, professional and social networks, video and photo sharing, wikis, forums and related Web 2.0 technologies." (If you parse that, it matches up pretty closely to the 4 C's model of social media marketing.)

Among the findings in MarketingSherpa's research:
So, per MarketingSherpa, blogging, blogger relations and online news release distribution (as well as creating social media releases using tools such as Pitchengine) are among the most effective social media marketing and PR tactics.

For another perspective, in Social Media and B2B Marketing - 6 Things You Can Do, Eloqua's Steven Woods outlines six areas of focus for social media marketing tactics centered around providing valuable content, being credible in all online conversations, and understanding and responding to your customers' natural buying process rather than trying to force a selling process on them. As he states it, "The prospect does not want to be 'sold' to. They do want assistance in understanding whether to buy, how to buy, and what is available to them."


The bottom line: do what makes sense for your organization, and creating your strategy starts with listening to what your customers and prospects are saying about your company, your competitors and your industry. But also base your plans on research, learning from the mistakes and successes of social media pioneers.

Unknown said…
Social media marketing had gained much importance during the last few months. This is evident from the kind of client requests we have been getting through social media for our company, SalesOnlineWorld.com.

Anyways, thanks to you Tom for coming up with such an informative post.

By Tom Pick May 07, 2007
Although I generally try to keep the tone of this blog positive and avoid disparagement, it's important to expose what doesn't work as well as what does. Saves you the time and trouble. With that in mind, here are 11 Web 2.0 social tagging sites to avoid. If the owner of any of these sites cares to fix their problems and contact me, I'll be happy to post an update. folkd.com On my first attempt at registration, I tried five different email addresses; the service kept saying "email address already in use. Please use another or click 'password forgotten.'" There was no link to "password forgotten" on the page. My second attempt at registration went more smoothly until I reached the account activation page from their activation email, at which point I copied the activation code they had sent and got an error stating "Could not activate your account! Please insert a valid activation ticket to activate your new account." After the third at
1 comment
Read more